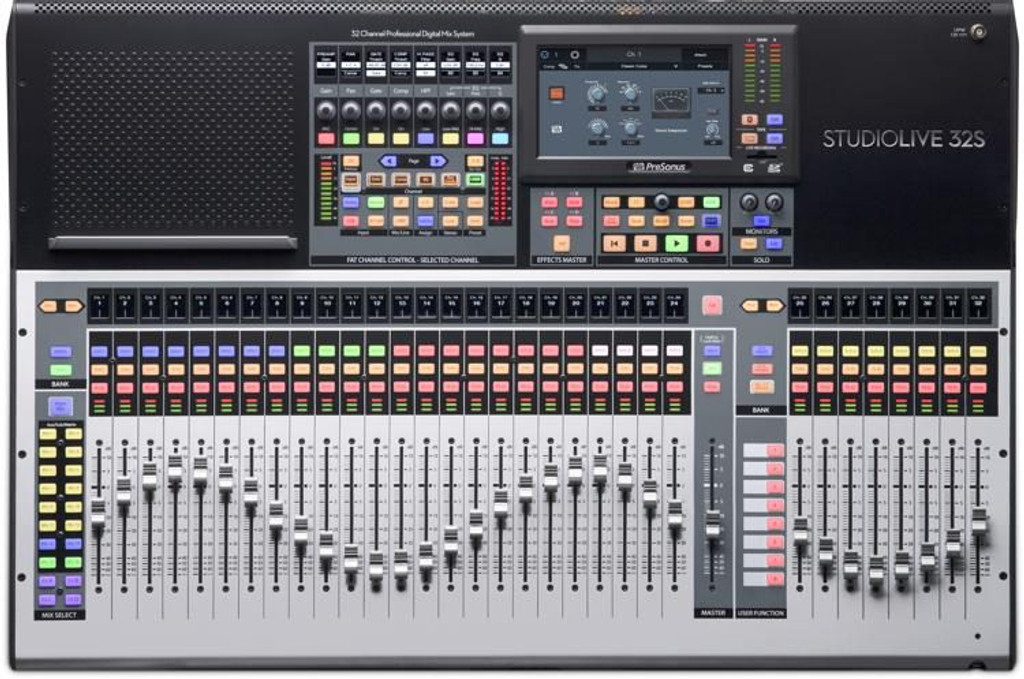 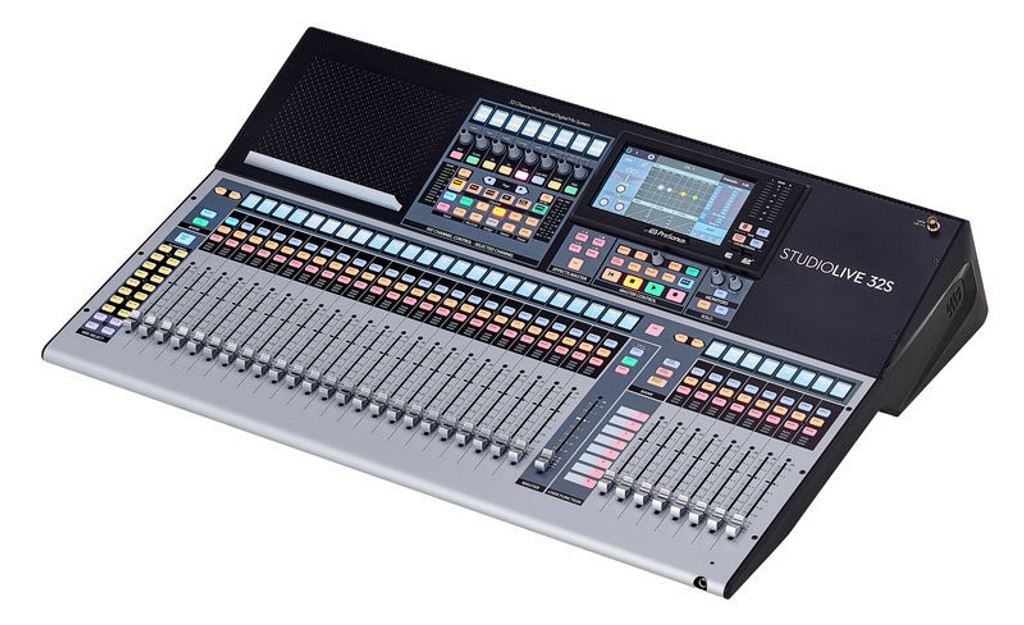 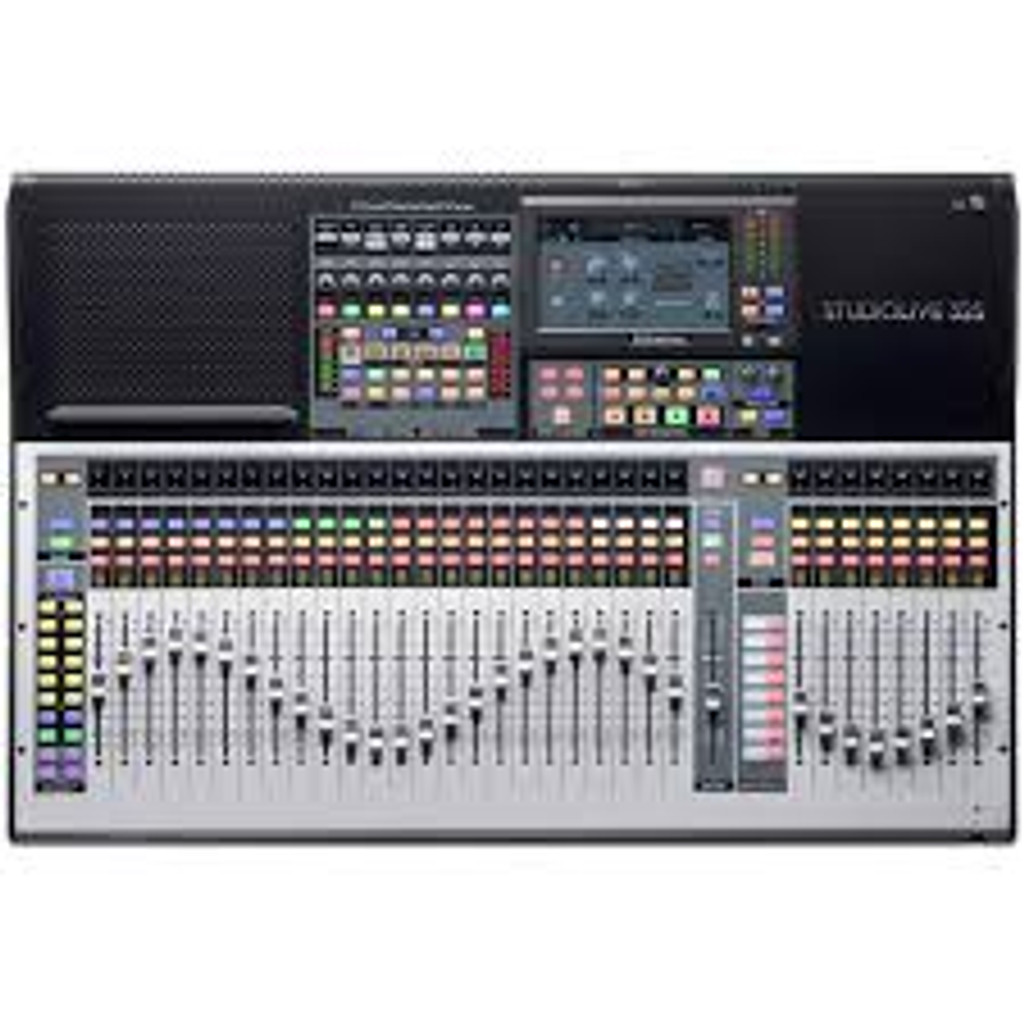 The most powerful and flexible digital mixer for recording and live sound.

The 32-channel StudioLive 32 is the most powerful and flexible digital mixer available for live sound and recording. PreSonus gave the StudioLive 32 the works: 40 total inputs; extensive AVB networking; more recording tracks over USB than any other digital mixer; touch-sensitive motorized faders; and a host of State-space modeled Fat Channel plug-ins that let you expand your processing options. Packaged with a full suite of integrated software, including PreSonus Studio One DAW and Capture™ live-recording software, the StudioLive 32 is a groundbreaking professional digital mixer and USB audio interface in a compact, scaleable design.

The scalable digital mixer that grows with you.

Every audio system is built to solve a unique set of problems. The StudioLive 32 digital mixer and the PreSonus ecosystem of AVB networking products allow you to create a system that is truly customized for your needs. Connect NSB-series stage boxes to add remote analog inputs and outputs wherever they’re required. Add EarMix 16M personal monitor mixers to give your musicians their own customizable 16-channel monitor mix. Multiple StudioLive Series III digital mixers can be networked together, allowing you to route audio to and from any device on the audio network thanks to the flexibility of Digital Patching available both onboard your StudioLive 32 digital mixer and inside UC Surface remote mixer software.

The best digital mixer for recording - with or without a computer.

PreSonus Capture recording software is an intuitive, rock-solid multitrack recording application with a fully integrated Virtual Soundcheck mode that runs directly on your StudioLive 32 digital mixer or on your macOS or Windows machine. This gives you the option to record to your computer using the USB audio interface built into your StudioLive 32 digital mixer, or leave your laptop at home and record 34 streams directly to an SD card. Record any combination of channels, FlexMixes, and the Main stereo mix either to USB, to an SD Card, or both for the ultimate redundant live recording rig with the touch of a single button. StudioLive mix scenes can be stored with your recordings to speed up Virtual Soundchecks. Best of all, Capture sessions open natively in Studio One with the entire StudioLive mix scene recreated in the Studio One console, complete with fader levels, Fat Channel settings, mutes, solos, and more to launch your live mix right where you left it.

For years, we've included Studio One Artist with our hardware interfaces and mixers. But with the StudioLive 32, we know you're looking to go big or go home so we chose to bundle the Professional edition of Studio One with each StudioLive 32. Not only will you enjoy Professional only features like Melodyne Integration, the mastering Project Page, Note FX, and Macro Controls, you'll also get tight hardware integration between Studio One and your mixer, including remote preamp control from directly within Studio One. 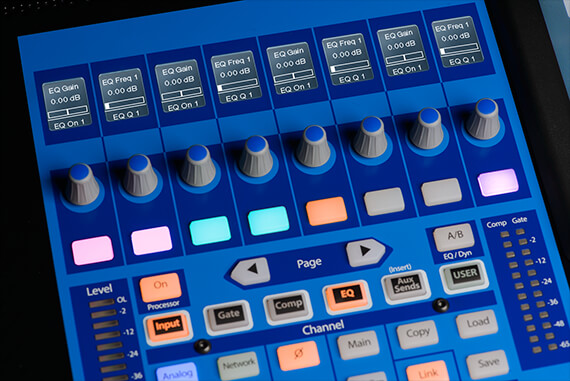 Create buses and groups you need.

Whether you’re mixing in the studio or for a busy festival stage, the buses you need to facilitate the mix you want to create change. PreSonus designed the StudioLive 32 digital mixer to adapt with those changing needs. Each of the 16 FlexMixes on the StudioLive 32 digital mixer can be individually configured to function as an aux bus, a subgroup, or a matrix mix. An additional four static subgroup buses and four designated effects buses provide a total of 24 mix buses plus an independent solo bus and the main mix. We also provided 24 DCAs so you can more easily and flexibly control groups of channels. And with flexible viewing options for the 33 touch-sensitive motorized faders, you can choose to view 32 inputs at once or split your faders between 24 input channels and 8 outputs, including DCAs and subgroups. The Master fader can even be locked to always control your main mix or to follow the currently selected mix.

Reconfigure your mix without unplugging a single cable.

StudioLive Series III digital mixers incorporate the concept of an analog patch bay and digitize it. This lets you patch any analog input or digital return (AVB, USB, or SD) to any channel you like and customize your mix configuration. This flexible feature also allows you to freely route audio to your AVB network and record anything you’d like via USB, so you’re not limited to recording just the input channels and the main mix. 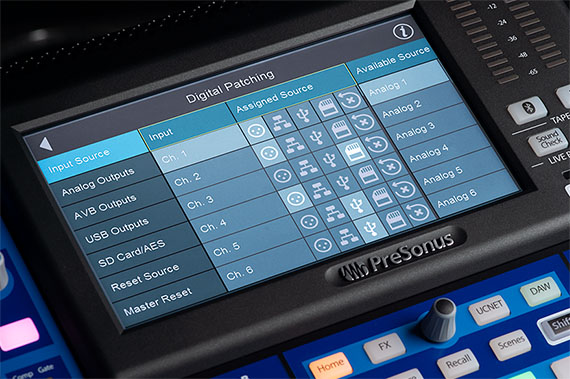 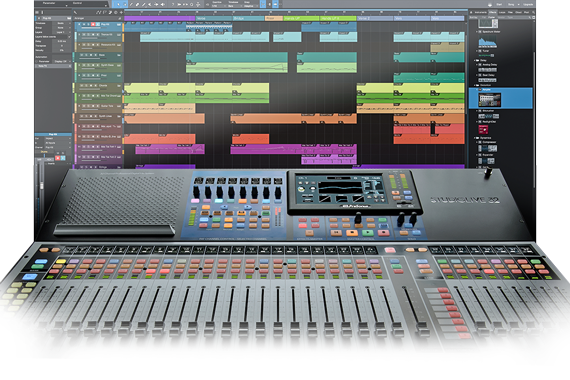 Remote control your digital mixer from anywhere… on any device.

PreSonus StudioLive 32 digital mixers are tightly integrated with an entire suite of state-of-the-art software. Mix wirelessly using UC Surface touch-control software for macOS, Windows, iPad and Android. Control your monitor mixes with QMix-UC for iPhone, iPod touch, and Android devices. A dedicated 1 Gb Ethernet port is provided to connect to a wireless router and create a control network for devices running UC Surface or QMix-UC. Adjust monitor mixes on stage; move around the room to dial in your mix; or add an accessory shelf and use your mobile device as second screen for your StudioLive 32 digital mixer.

The back panel of a StudioLive 32 digital mixer is equipped with plenty of local analog I/O. 32 local analog mic/line channel inputs make it easy to connect a variety of gear. 16 local mix outputs let you route to floor monitors, delay stacks and more. But the local I/O is only half the story. Connect your StudioLive 32 digital mixer to an AVB audio network and add remote inputs and outputs anywhere you need them using NSB-series stage boxes. 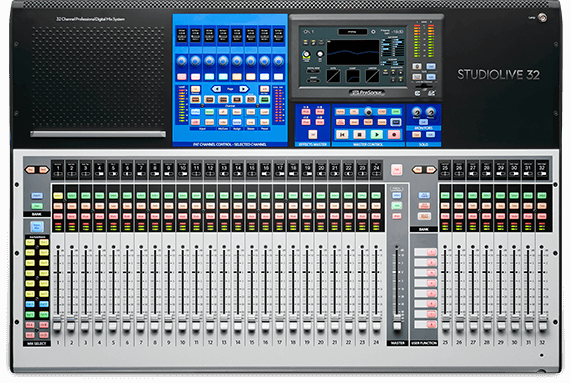 PreSonus built our reputation designing great-sounding analog circuits for critical studio recording environments, and we put all of that experience into designing the StudioLive 32 digital mixer. In 1995, PreSonus patented digital control over analog circuits with our first studio product. Building on this legacy, we created a separate digital volume-control circuit ahead of our lauded analog XMAX mic preamp design, providing the convenience of digital recall without sacrificing fidelity. This allows the StudioLive 32 mic preamps to be remote-controlled with UC Surface software or Studio One, and when you load a StudioLive 32 mixer scene, the mic preamp trim values can also be recalled along with the other settings.

When we introduced the StudioLive Series III S mixers, we upgraded all Series III mixer warranty programs to three years as well, including both console and rack mixers. Even if you bought yours two and a half years ago, you're covered.

We take our build quality seriously, and if anything goes wrong with your mixer in your first three years of ownership (assuming you don't throw it in a swamp or anything like that) we'll repair it.

Below are the minimum computer-system requirements for UC Surface, QMix-UC, and Studio One®.